Posted on March 8, 2014 by randyjmueller

I have to look it up every time I write it down – which in my many years of working on the unusual as well as the mundane, has happened all of 3 times. What exactly is it, you ask? It’s a brass instrument similar to a euphonium, stretched out and curled around – with keys like a saxophone. Its name literally means, “serpent with keys.” It was invented in the early 19th century for the Paris Opera and there are still people around who play these things.

So Barry Boccaner, a software engineer and musical polyglot, comes into my shop with this 1902 Couesnon ophicleide that has seen better days. It had broken solder joints, the keys were bent, and it had a huge split in the bottom bow. It needed to be entirely re-built. 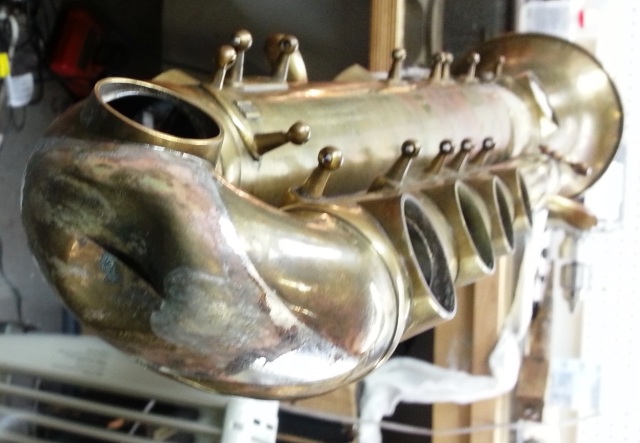 After removing the keys and the bow guard, I realized I had to disassemble the instrument. This gave me access to both sides of the bow. Because of the age of the metal, I had to be careful not to crack the brass while removing the dent.

After pulling and de-denting the bow and guard, I thought I should add reinforcement, so I fabricated a new diamond and shaped it to match the original bow. 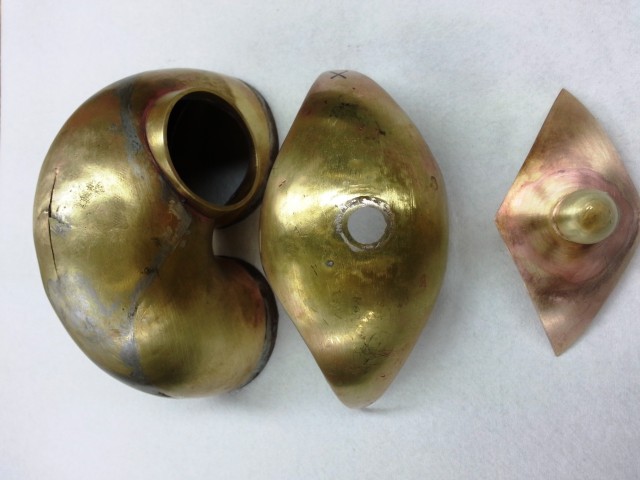 Here is the finished bow with new guard moldings installed.

The next step was to install the first branch and proceed like a saxophone rebuild. This involved leveling tone holes, aligning posts, straightening hinge rods, fitting the keys, installing new pads, etc.

One of my challenges on this project was to improve the action and feel of the key mechanisms. To do this, the original springs, which consisted of large diameter tapered steel rods, had to be replaced with a contemporary substitute. I drilled out the existing spring cradles and soldered a center-drilled 1/8″ piece of brass rod stock into the cradle. This allowed me to install new stainless steel springs.

All in all the project was rewarding, although it took longer than I originally planned. With these vintage instruments, there are always surprises.

1 Response to Oh! for Ophicleide