Last night at Blues Alley we had the good fortune to hear a trio of bad-ass trumpets, accompanied by piano, bass and drums. The Triumphant Trumpeters were Jon Faddis, Lew Soloff and Terrell Stafford – each a legend in his own right.

The gig was organized by Jon Faddis, to whom I was introduced by Reynolds Schilke at the Schilke facility on Wabash in Chicago back in 1974. The first time I heard him play was a year later at Stillwater High School in Minnesota with the Thad Jones Mel Lewis Big Band. In 1980 I played with Lew Soloff in Columbus, Ohio, where he was a guest artist with the Jazz Arts Group. I never had the opportunity to meet or play with Terrell Stafford, the youngest of the bunch. Being that we were early to nab good seats, we had a chance to chat with Jon, who joined us at our table. Nice guy. Traded a few words to Lew as well. 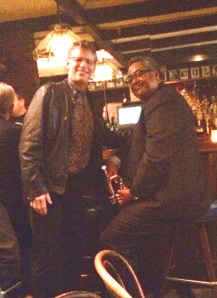 Faddis has played a Schilke horn forever, with a Laskey mouthpiece, considerably lighter in weight than the one he used to play. It has a tunable bell with a sound post and he was wondering if there was anything I could suggest to help slotting above a double C. Haha!

They played tunes by Miles Davis, Dizzy Gillespie and Clifford Brown. It was thrilling to hear the three of them trading courses and fours, especially in such an intimate setting. They blew me away years ago and they blew me away again last night. The band was hot and the salmon was pretty good too.