Something’s Fishy Outside the Beltway

It’s a good idea to take a trip outside the beltway to  get a glimpse of an understanding of just who might vote for the likes of The Donald. We set out for a long weekend to visit Yo’s family who converged on Pine Island on the Gulf coast of Florida. Upon arrival, we were informed by Yo’s uncle Greg, our weekend cruise director, that we were headed to The Lobster Lady for dinner.  YESSSSSSSS!!!

But before we were to indulge in crustaceans, we had to stop in to visit the manatees. Unfortunately, they weren’t as interested in us as we were in them, so we moved on to meet our dinner. 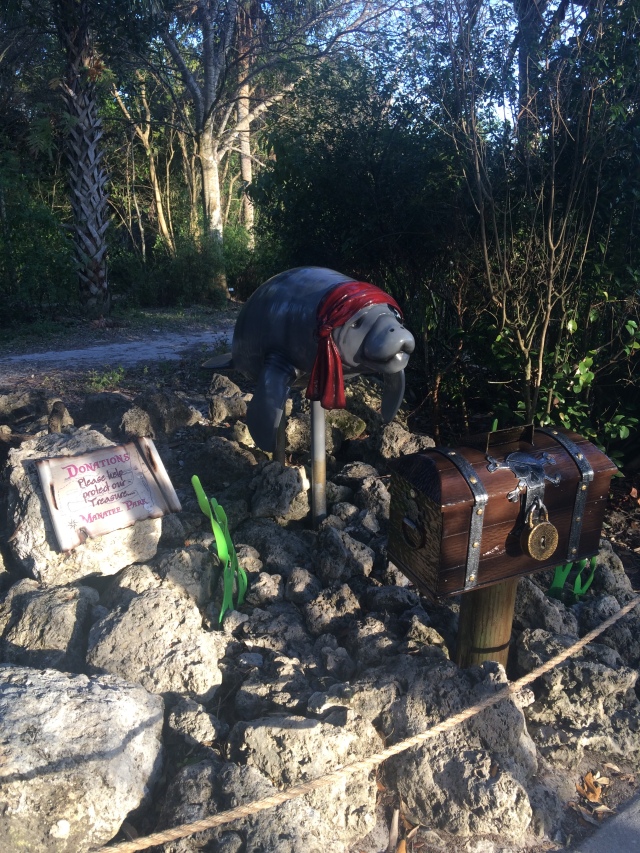 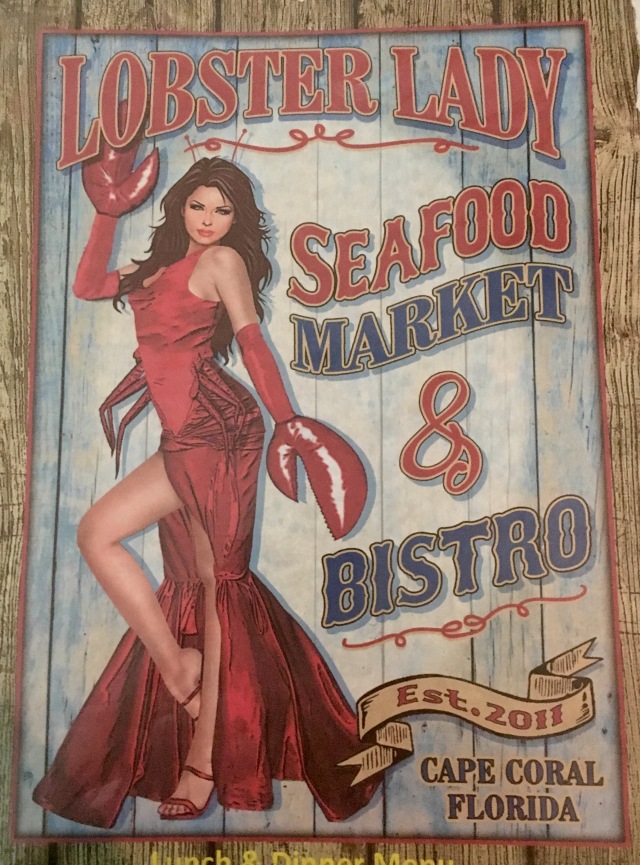 This Lady wasn’t there that night, but we were nonetheless entertained by a jolly fellow singing Karaoke to tunes by Pasty Cline, Adele, Nat King Cole, and Prince, ending the set with a rousing version of Neil Diamond’s Sweet Caroline, with the “Oh, Oh Oh’s” gleefully sung by the crowd. 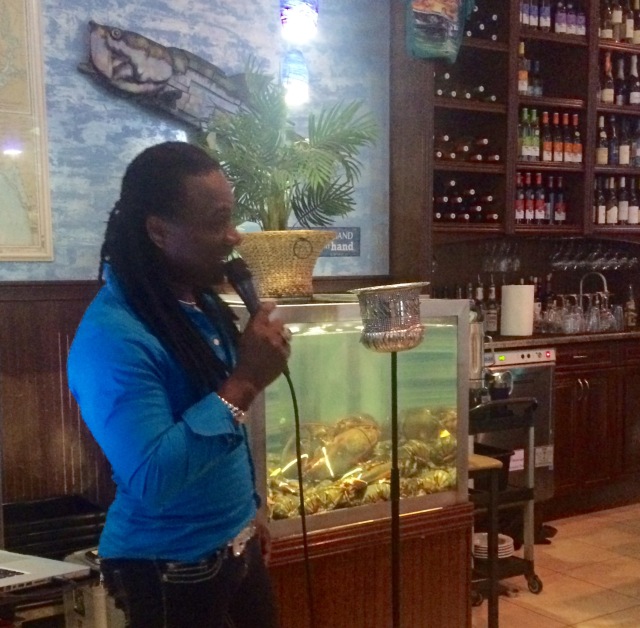 The dudes in the tank didn’t seem to mind as their last moments on Earth were numbered.

On TV there are endless commercials of The Donald vs. Rubio. “Trump steals property from little old ladies!” “Marco is mortally wounded – in fact, he’s already dead!” Despite these claims it looks like Rubio could maybe possibly close the gap…if he could only grow a mustache by next Tuesday. Cruz is M.I.A. Clinton? Sanders? Who are they? Oh, and Kaisch. Is he still in the race?

Greg says there are a lot of people on the island who will vote for Trump. There are wild boars who terrorize retirees in golf carts, wild pigs that run lose, making a mess of the ladies’ gardens, and Burmese pythons that stop traffic. They need a President who can make Pine Island great again!

Talking a break from politics, we took an island tour and discovered some interesting stuff. There is a little strip of shops and old fishing huts in the town of Matlacha (Mat-lah-shay) that sport all the colors of the rainbow. Here we are at the Leoma  Lovegrove Gallery and Gardens. 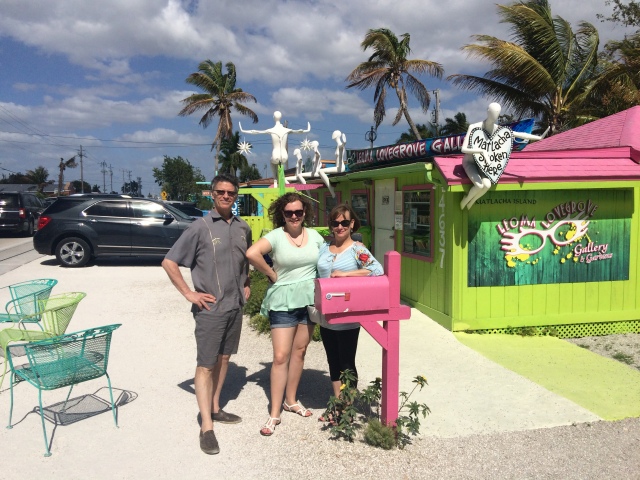 In the Garden of Lovegrove

But the fun didn’t stop there! We had dinner at The Lazy Flamingo, a place where you can BYOF. That would be Bring Your Own FISH! “You catch-’em, you clean-’em and we cook-’em!” We brought a lot of fish. Pompano, Mangrove Snapper and Sheepshead, prepared grilled, blackened and fried. It was awesome!

The next day Captain Greg took us out on a cruise of the canal system to Jug Creek. The water was too choppy to make it all the way to Cabbage Key, so we decided to do a little fishing. Emphasis on little.

For a few minutes I could entertain the fantasy of getting away from it all and just living on a canal with a boat and not much else.

The one that got away was bigger…

Saturday morning we were up early to go sailing. Yard sailing, that is. Yo’s mom is an Olympic Gold Medalist in sailing; her brother, Greg, holds the Silver. I was there to troll for tools. I didn’t find any tools, but I did find something hard to find anywhere else.

It was none other than Leoma Lovegrove, of rainbow art gallery fame.

Yolanda, posing as as a photo journalist, was asked by a local to send her snapshots to The Pine Island Eagle newspaper for a story – which she did. It’s easy to be famous on Pine Island, so stay tuned…

After scouring many yards, we had breakfast at The Perfect Cup, where we saw this flyer. Too bad we won’t be here next weekend!

Maybe The Donald will be there trolling for votes. Obviously, he can toss Mullet farther than anyone. In fact, he could toss every last Mullet out of the country! Nobody likes Mullet anyway – useless fish.

For our last dinner we had the special treat of stone crab claws. The beauty of this beast is that the crabs grow new ones, creating an endless recycle of chow. In a feat of dexterity, Greg managed to flip a claw into the air while attempting to crack it, and it landed in Ava’s Ginger-rum cocktail. Then I dropped a claw into Yolanda’s wine, creating the new pass-time activity, “Claw Pong.” What are the odds? 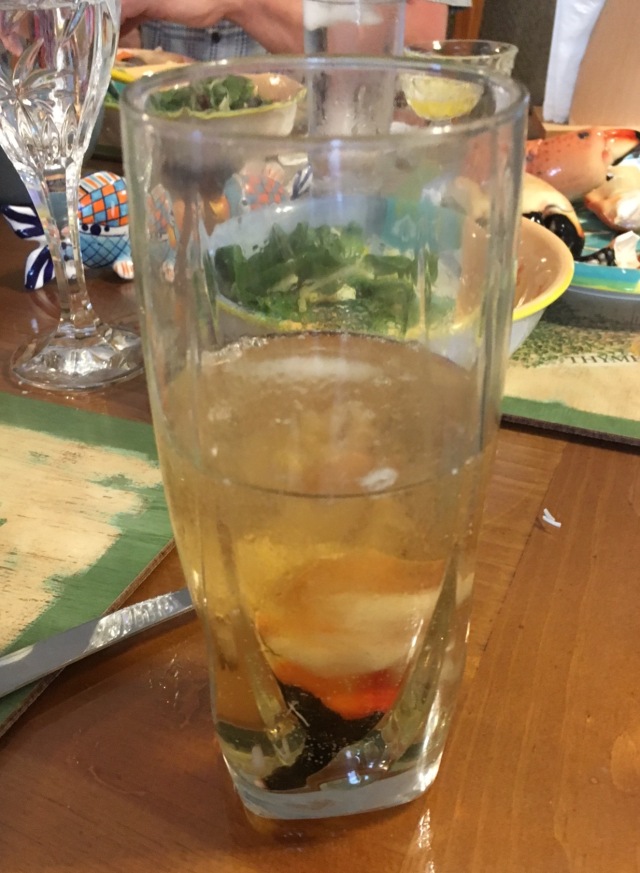 Our final adventure before heading home was to visit Fort Myers and the Edison & Ford Winter Estates. Thomas Edison was a mentor a great friend of Henry Ford and they built vacation homes next to each other on the Caloosahatchee River. There is a nice museum there as well, along with Edison’s lab away from home, where he performed endless experiments while on vacation.

The voters of Florida are about to perform their own experiment as they contemplate the Donald on Tuesday. It is hard to understand how it was come to this point and even harder to know how to get out of it. Last week Google reported that they had a record number of searches on “How to move to Canada.” That could be one answer, but perhaps they could consider voting for an alternative. In the interim, it’s time for me to return to my comfort zone inside the beltway!

Sr. Instrument Repair technician
View all posts by randyjmueller →
This entry was posted in Music, Travel, Uncategorized. Bookmark the permalink.