Posted on December 4, 2016 by randyjmueller

I had the good fortune to take a quick trip to New York this weekend to join Yolanda, who was up there for business this week. We spent most of our time visiting art museums and bumping into tourists on the streets, ending up at the Jazz Standard for a show before heading home. On the advice of my good friend Cedric Baker, a painter and neighbor at the Arts Walk studios, we stopped in to see the Kerry James Marshall block-buster show at the Met Breuer. WOW!

Kerry James Marshall was born in Alabama, raised in LA, and made his career in Chicago amidst the termoil of the Civil Rights Movement. His paintings depict silky black figures in familiar settings, some stereo-typically black, and others most typically found in white. He uses a wide range of historical traditions in painting to address the “vacuum in the image bank” of black people in art, making the previously “invisible, visible.” 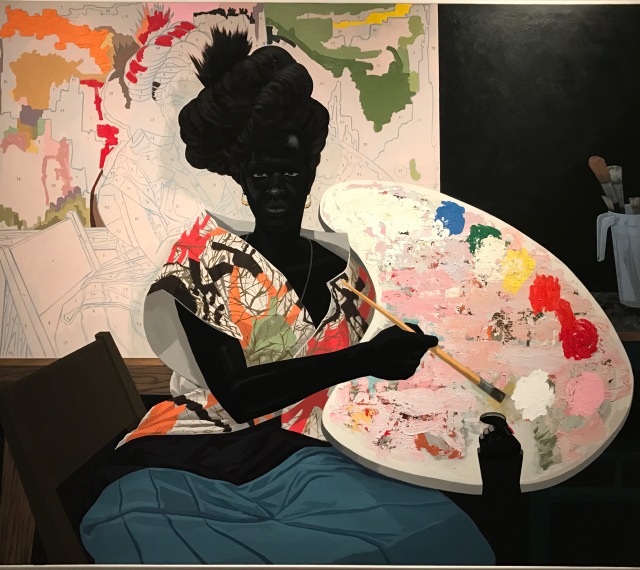 At the visible end of the spectrum, we also stopped by the Neue Galarie, the museum of Austrian and German Art. This was a nice follow-up to our trip to Vienna. The Neue Galarie has as its prized possession what has become known as the “Woman in Gold.” A recent movie by that name chronicled the theft of the painting by the Nazis, recovery by the Austrian government, and then the return to its rightful owner, Maria Altmann, through a momentous ruling by the US Supreme Court. Check it out!

Portrait of Adele Bloch-Bauer by Gustav Klimt, the Neue Galarie

We also discovered that John Quincy Adams, our 6th President, was also a fine painter. His father was a tenor in the Vienna Opera and John Quincy studied at the Acadmey of Fine Arts in Vienna and Acadamie Julien in Paris. Who knew?

Last night we went to a show at the Jazz Standard, a club that’s been around for about a decade. We heard The Power Quintet, led by Jeremy Pelt on trumpet, along with piano, vibes, drums and bass. He plays a Harrelson that looked to be in a deep purple lacquer. They played all original tunes by band members, in crazy asymmetric meters with abstract melodies. Jeremy’s two well-mannered kids were there, ages 4 and 7, dining in the corner and listening to daddy. You had the feeling they’ve been a part of the scene all their lives.

It was a short but sweet adventure, full of art, street life and music. Speaking of, we took an early train home today, then headed straight to orchestra rehearsal to play our our own bit of music, and to create a little art. What could be better?

1 Response to Art & Jazz, Above Standard