Posted on November 13, 2016 by randyjmueller

After a difficult and divisive week for our country, it was a comforting respite to spend Veteran’s Day with one of the top big bands on the planet, the Airmen of Note. This was the third of their Heritage Series, which featured Terell Stafford, one of the greats of the trumpet. Terell Stafford is a Maryland local who made it big by taking the advice of trumpet legend, Winton Marsalis. He studied with Dr. William Fielder at Rutgers and then went on to play with McCoy Tyner, Benny Golson, Kenny Barron, John Faddis and others.

The Airmen of Note with Terell Stafford

The Airmen opened the show with a red-hot rendition of Dizzy’s Lorainne, with Chief Master Sgt. Tim Leahey blowing some blazing bebop. They were joined by Tech Sgt. Paige Wroble, singing a harmonically stretched arrangement of Skylark. Being a trumpet player, I’m always amazed at the firey back row, with Sr. Master Sgt. Kevin Bruns and Sr. Master Sgt Brian MacDonald splitting Lead.

We were joined by our own little band of music fans, Zohar, a writer and Hip Hop dancer, and Cindy and Matt Zolla, who make up the core of our jam-band, BB9 (Bed Before 9). I ran into two great sax players/clients, Vaughn Ambrose and Will Tynch in the audience, and I caught a glimpse of Matt Fitzsimmons, my partner in crime from City of Angels.

Terell is a generous guy. He made a special effort to highlight several members of the band with solo features. As a child, he attended Airmen of Note concerts and hoped to join the ranks. That night he wore his own blues. In a special tribute, he asked Tech Sgt Luke Brandon, a former student, to join him in a duet, trading choruses, completing the circle.

Terrel’s own soloing is relentless. He has complete command of the instrument, which he plays in a continuous stream with crazy technical prowess. The man has some serious chops. You can see how much he enjoys his craft – just look at that smile! 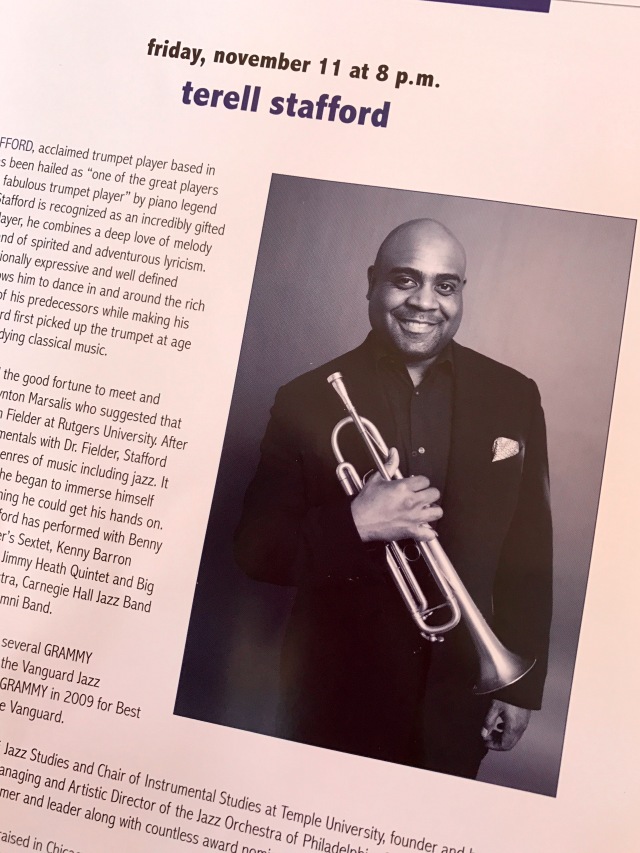